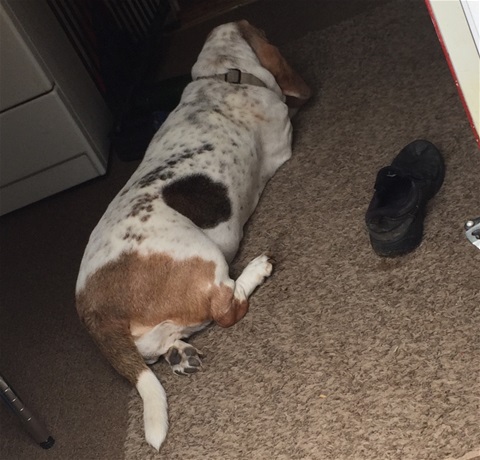 Sunday afternoons between church and taking the boys back for youth activities I have tried to claim as "Time". I don't call it "me time", I prefer not to be "trendy" or "in" so I just call it "Time".  Capital "T".  In these short hours of "freeness" I find myself grading papers, catching up on laundry, gardening, sun "worshipping" (No worries--inside joke…I'm not in need of an intervention!) or maybe getting a minute with Wayne on the couch to watch our latest NETFLIX addiction.

This past week, our family had just returned home from church.  Lunch was served, the table was cleared.  It was "Time".  Before I could focus my attention on any one thing, Naughty Dog started her "dance".  The one where she circles my chair "barooing" and convulsing herself as if to say, "Put me where the sun is shining!!"  I approached the back door to where her "altar to the sun" is (back porch stoop) and I stood holding the door open.  The sight must have signaled Naughty to shift into "snail mode". Anyone that has ever owned a hound knows exactly what I mean.  Hounds seem to believe they are in charge or superior.  They move if and only when they want--at the speed only a hound feels is applicable at the time.  And, with Naughty, unless it involves a chocolate chip cookie her main speed is usually SLOW…slower than SLOW.  She finally made it to the door I was holding open.  She sniffed, turned herself around and plopped back in the laundry room with her hind-end towards me--and the door.

"Naughty---come on!"  Nothing.  "Anna Marie!  If you want to go out you need to move!"  (I really think she understands every word I say even if Wayne says she is just a hound.)  I attempted to move the almost 80 pound pile of flabby fur.  Just so you know--80 pounds of wrinkles is heavy--very heavy.  It wasn't happening.  Her mind was made up.  I am certain what occurred was her sniffer had smelled Fall when we approached the door.  My sniffer sniffed it.  So I'm sure the hound sniffer did.

The smells of Fall always awaken an old season of my life.  Our life. In September 2001 our niece, Mackenzie was born, and in October Wayne and I were to welcome twins to our home.  I was always told I would never have children.  Endometriosis was the main excuse to never try.  Upon my husband's salvation, he walked in the door one night and proclaimed he wanted to be a  Dad.  Now mind you, I was not saved.  I was perfectly content in my brand new home where everything was "just so".  I had worked five years as the only woman in a "man's business" as an auto parts salesperson.  After those five years, I was given a managers position in my own store.  My baby. I was perfectly happy with the way life was.  After a short, snippy conversation it was decided we would try to have children. I really didn't want any of the responsibility because I was working 60 hours, sometimes more a week.   Deep down I really didn't think I had anything to be concerned over---after all having a child was impossible.

About a month later, much to my surprise-- and my doctor's, I was pregnant, with TWINS.  My initial, very vague exam detected there may be a "problem" with the first baby,  but the second was healthy and strong. I had no clue what any of it meant. I just went with what the doctor said.   It's not like I had ever planned on having children, so I never really studied up on what to expect or how it all worked.  Unlike most young girls, I never let myself "dream" of my future children, what I would name them.  I just didn't.  It was a dream I was told not to have because most likely, it just wasn't possible.

Sadly, two months into the pregnancy, I experienced some difficulty and it was discovered the first baby had passed away.  I was put on bed rest with hopes of saving the second.  The day before I was to return to work I was scheduled for an ultrasound where we discovered the second baby's heart had stopped.  I would like to tell you the heart ache ended there, but it continued for two days while I went into labor and delivered our girls.  Della and Ruthie.  Many circumstances lead to us never seeing our girls.  Never holding them.  Never having an explanation for WHY.  Part of that may have been my unsaved view on this world. Part of it could have been poor doctoring. I struggled with that for a very long time.  I never held them.  I never said goodbye.  I never laid their little bodies to rest.  It was such an unsettling and dark point of my life.  The darkest I had ever seen.

Through this time of doctors visits, blood test and every medical doctor in two towns trying to figure out how I had even conceived--and what had caused the girls to die--Wayne went on.  He smiled.  He had joy.   He just kept telling me they were ok and it was all going to be alright.  I burned with anger towards him.  How could he be so light hearted about all of this?  He had put the idea in my head in the first place.  He and his God.  I was so angry at this way of life he had taken on.

My strongest Christian influence growing up was my Gram.  She read me all the typical Sunday School stories.  She told me about all the "rules".  Because I listened to her stories and did my best to follow her "rules of life" I thought I was good.  I knew this God guy.  I'm good.  But what I never understood was Gram knew Jesus.  She really KNEW Him. And my husband now also knew Him.  I didn't understand I needed to KNOW Him.

Wayne had bought me a Bible for Christmas.  I was not happy at all about it. In fact, I threw it at him.  I told you I was in a bad place!  I had drowned myself further into work and spent any other time I had going out with friends.  Wayne was at home waiting.  Patiently waiting on his angry, bitter wife.  I had come home one Friday night to find him in his "hole" in the basement where he spent most of his time at this point of our marriage.  I was so tired.  So drained.  I had been angry for so long.  How?  After being told I could never have children--how could I have become pregnant?  And WHY would this God allow me to become pregnant and then take them?  WHY?   I hit rock bottom.  The kind of rock bottom where you either do something really, really awful to yourself---or the rock bottom where someone reaches a hand down and pulls you out of the hole you have found yourself laying at the bottom of.

That night, a hand did reach down for mine.  From my bed I could see the Bible Wayne had bought me.  I found myself reading:

"Is anything too hard for the Lord?  I will return to you at the appointed time next year and Sarah will have a son."  Genesis 18:14.

One verse.  I knew.   I kept reading, searching.  CRYING.  That night I came to KNOW who Jesus is.

It was a lot of waiting on tests, waiting on appointments.  Then, many doctor appointments later, I sat in a room with my doctor pleading with me to let go of this hope of being a mom.  She was frustrated with our eagerness to keep trying.  She asked me what I was thinking.  I said, "Well, it's like this:  If I am to have a baby it will be God's doing.  We will just go from here and let Him worry about it."  She literally threw her hands in the air in disgust and walked out.  A year later, much to her surprise, God gave us William Patrick.  Two years after Will, Nathan Benjamin came into this world. These "impossible" babies, by the Grace of God, are now twelve and fourteen.

"I waited patiently for the Lord; he turned to me and heard my cry.  He lifted me out of the slimy pit, out of the mud and mire; he set my feet on a rock and gave me a firm place to stand.  He put a new song in my mouth, a hymn of praise to our God.  Many will see and fear and put their trust in the Lord."  Psalm 40:1-3