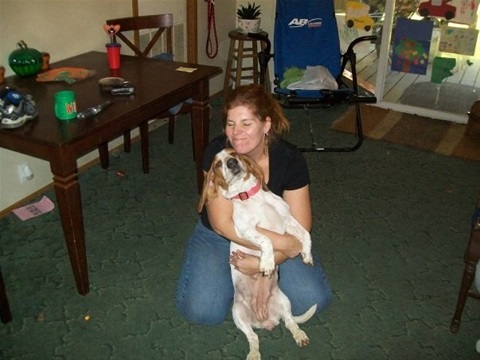 naught dog's homecoming...we both were younger and much smaller...but that's a blog in itself!

Most people would read that word and picture a house.  A building.  A place to go.  Some would think of a farm with the smell of fresh cut hay and mom at the door greeting you as you pull in the long driveway. Others may think of a dance with fancy ribbons and crowns.  A gathering of friends.  Celebrating where you came from.  When I think of the word "homecoming", my perspective is slightly different than most. Of course, I am reminded of my Naughty Dog.  And apple pie. Yes.  Naughty Dog and apple pie. But for now we will talk about Naughty Dog.  The apple pie may come later!

It was a crazy Sunday morning. Wayne, my husband, was working seven days a week as an electrician in the transit industry.  It was up to me to wrangle two wild-haired, chocolate-milk-stained-faced boys to church alone.  Needless to say, that was an experience in itself!

I always had good intentions. Honestly.  I planned on getting everyone up earlier.  Ironing our clothes, bathing the boys properly and strolling into church perfectly put together, entering the building grouped  in a picture-perfect moment--almost as if we were floating in on a magic carpet.  Most Sundays my fairy tale was ran over with an eighteen wheeler.  Sometimes double whammied with a steam roller!   As I pulled into the parking lot that morning, (maybe sliding a bit side ways!  It's really amazing what a Town and Country is capable of!) I realized we were late. Again.  I ran through the parking lot, one sticky, half dressed boy in my arms, who had "forgot" it was church and chose to wear his barn boots, dragging the older boy behind me.   "I want DAAAADYYYY!" he screamed as the cloud of dust from our "eloquent entrance" was clearing behind us. (Like I said--I am amazed what a Town and Country can do!) We crashed through the door causing the poor people acting as greeters for the morning service to have second thoughts about the new ministry they had just signed up for! Yes.  A typical Sunday morning for a Momma alone with boys---but determined we were going to get to church.  Barn boots and all!

After the service we loaded our exhausted bodies in our obviously NASCAR equipped van. One boy was still crying.  The other still cheering happily about wearing his barn boots to church.  I sat in the parking lot feeling defeated.  Tired.  I'd never get it together. My phone beeped and I realized I had missed a call from my husband.  He said he was done for the day and would meet us at our local grocery store.

I proceeded to drive (using all traffic laws) home towards our little town of Andover.  When I pulled in the parking lot and next to my husbands car, there she sat.  I couldn't believe it.  In Wayne's passenger seat sat the dirtiest, stinkiest, skinniest creature.  She sat right up on her hind-end looking out the window as if a person.  Her belly was hanging so low.  She was obviously a "she" as it appeared she had recently had pups and very recently had weaned them.  It was my Anna.  Nothing but a sack of weary bones.  I sat staring in  amazement.  I had grown up mostly with hounds. I had always wanted a basset hound.  This poor girl looked as if she wasn’t going to make it through the night.  The sight of her had quieted the turmoil in the seats behind me. Thankfully.

Upon Anna's "homecoming" Wayne shared her story.  This poor girl had once been everything in a young mans life.  He trained her to hunt and spent hours running rabbits with her. Then a girlfriend came into the picture and Anna was shoved to the side.  The girlfriend didn't have patience for how God made the hound and preferred she moved on.  She no longer belonged.  She was sent to live with the young man's parents.  They tried with her, but it does take a unique soul to handle the attitude of a hound.  Though very loving, they tend to be quite arrogant and very mouthy.  Their nose encourages them to get into spots they really shouldn't be. Hounds tend to be very snappy about "what is theirs" and prefer not to share.   I guess Grandma had enough of the counter sniffing and table surfing.  Anna's attitude was not something Grandma wanted to work with.  Anna was moved to a kennel out back with the rest of the hunting dogs.  From there she had a batch of pups, and as soon as they were weaned and sold it was time for Anna to "move on".  She moved on to our home.  Anna had finally found a place she was understood (most of the time…we still have moments!)  She finally had a place to belong.  Anna's homecoming.

I am reminded of Romans 5:8 "But God demonstrates his own love for us in this:  While we were still sinners, Christ died for us."

I'm not implying a hound has the ability to associate with sin. (Although Ken Davis does say, "All dogs go to Heaven"  and cats…well, they aren't so fortunate!)  I can look at my Naughty Dog's life before joining our family and am reminded of my life before knowing Christ.  I was selfish.  I still can be.  I was snotty.  Yes, I still have those moments also.  (I am a red head!) I didn't like to share.  I am improving here.  I spent many moments in situations I most likely should not have been in.  Situations that formed baggage that God and I are still unpacking and sorting through. Looking back at how our family welcomed Anna into our home creates a longing in me for my future "Homecoming".  To know I have given my life to Christ and He has accepted my dirty, stinky brokenness and loves me.  He loves me when I'm screeching to a halt in the church parking lot--late. Again.  He will still welcome me "Home" despite the fact I'm sitting defeated in a van full of unhappy children.  He has accepted me right where I am.  Every moment of every day, I belong.

"Yet to all who received him, to those who believed in his name, he gave the right to become children of God."   John 1:12